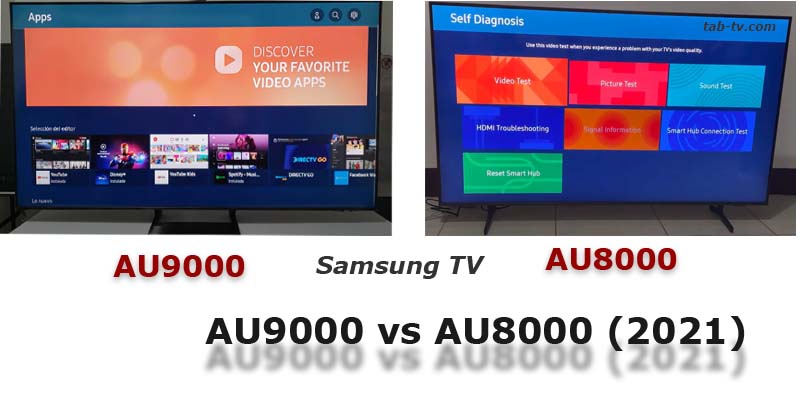 The Series 8 and 9 TVs in the Crystal TV lineup, as you should know, are the low-end line of the TVs. The AU series comes with standard LED screens, these screens can be made not only by Samsung but also by other manufacturers.

The Crystal series TVs are most widely available in Europe, with the TVs having several modifications depending on the region. In the US and Canada, only the AU8000 model is sold.

Although the TVs have the same processors and the same number of ports, we can say that in terms of tech specs they’re the same TVs. However, there are significant differences in the software. Basically, this means that the AU9000 is more geared towards gamers.

The AU9000 has the following differences:

Detailed differences between the AU8000 and AU9000

Now I will talk about how the listed differences affect the quality and comfort of watching TV.

Image quality index, this index is not described, how it’s calculated and there is no reliable information.

Implemented the way to connect the game console with a floating frequency, VRR supports up to 120 Hz. Allows you to use the TV as a monitor, the gameplay (thanks to the opportunity to transmit video at a frequency of more than 60 Hz) is more enjoyable.

Additional synchronization of the game console and TV for better image quality control.

The image on the screen will be more stable, and you will not see incorrectly formed frames.

Images from different sources, such as watching cable TV and YouTube at the same time that can be displayed on different parts of the screen.

The TV can be used as room decor, to display wallpaper or photos.

How to cancel Paramount Plus on iPhone and iPad

How to watch Paramount Plus on Sony Smart TV

How to watch Hulu on Sony TV

How to cancel Paramount Plus on Roku

How to cancel Paramount Plus on Apple TV

How to watch Hulu on Firestick and Fire TV

How to fix sound problews in Samsung TV Multi View